Arthur von Hippel was a pioneer in the study of dielectrics, semiconductors, ferromagnetics, and ferroelectrics. He was an early advocate of the interdisciplinary approach to materials research, art and science and his example substantially furthered the science of materials. 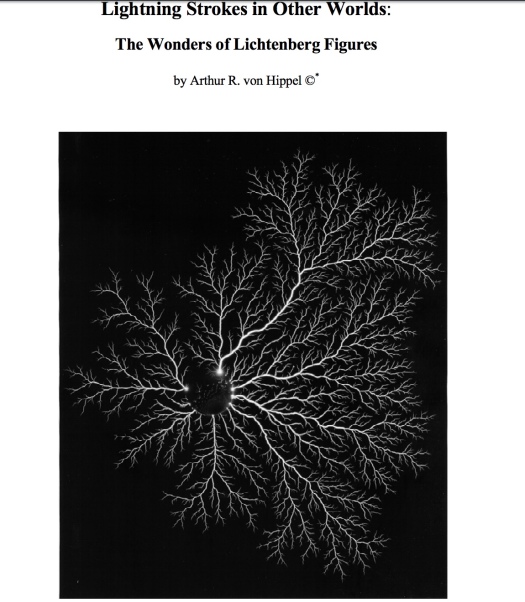 ‘About fifty years ago, I studied the development of electrical breakdown in gases and recorded in detail the discharge phenomena by placing electrodes on photographic plates.1 The resulting pictures were known as “Lichtenberg Figures,” named after a venerated scientist and philosopher of the 18th century, George Christoph Lichtenberg, professor of astronomy in Göttingen (Figure 1).2 Faithful to his maxim of exploring nature with instruments of unusual dimensions, Lichtenberg baked a tremendous resin cake (electrophorous) for electrostatic experiments. Clambering up a ladder he rubbed the surface violently with a fox tail, got an electric shock and fell down. The room was dirty since the observatory was being painted. A dust cloud arose and — lo and behold — it settled down on the electrified surface in patterns of unusual design (Figures 2).3 Ever since that chance-discovery of 1777, “Lichtenberg Figures” have aroused the interest of physicists — not only because the variety of their forms offers one of the most beautiful spectacles in science, but because they record in visible detail the onset of electrical discharges. Returning to this project at M.I.T. before World War II, I developed with my graduate student, Fred Merrill, some sophisticated equipment — a four-stage impulse generator and a pressure tank (Figure 3) — that made it possible to take pictures on photographic plates (Figure 4) from discharges at pressures ranging from vacuum to high pressures in any gas desired. Our principal results were published in 1939.4 Then the war, with its urgent demands, interrupted our work. Subsequently the commitment of the Laboratory for Insulation Research to the “Molecular Designing of Materials and Devices” pushed its continuation further out of sight. Finally, while I was in Washington, as the science advisor to the Naval Research Laboratory, the equipment got lost. Fred Merrill, a cheerful and lovable companion on obstacle courses — both indoors and outdoors — had returned to England at the outbreak of World War II and died there in the late 1970’s. Therefore, I find myself in old age with many beautiful pictures still on hand that might be enjoyed by the lay person as “art in science.” The primary purpose of this work is to make these surprising images more generally accessible. Simultaneously, it might stimulate new thoughts about thunderstorms and lightning strokes in other worlds in the universe. Space probes have recently recorded lightning strokes on a moon of Jupiter.5

LIGHTNING STROKES IN OTHER WORLDS

This work about stormy events is dedicated to two centenarians with whom I intimately shared the storms of our times: M.I.T.’s Electrical Engineering Department, and James Franck. When I came from Niels Bohr’s Institute in Copenhagen to the Massachusetts Institute of Technology in the fall of 1936, the President of M.I.T., Dr. Compton, placed me in the Electrical Engineering Department as its first physicist. The E.E. Department has become corrupted more and more by science ever since. James Franck (1882-1964) lives in many memories as a great nobleman of Science and a wonderful human being. We became close friends while going on joint adventures during my Rockefeller year at Berkeley (1927-1928) and his guestprofessorship there. He became my father-in-law in 1930.

The Onset of Electrical Discharges Electrical discharges are initiated by negative electrons (e- ) ejected from matter by photons (the photo effect), heat (thermionic emission), or intense electric fields (field-emission). Such electron “bullets,” accelerated by an applied electric voltage, collide elastically with atoms or molecules until they reach critical energies sufficient to excite or to ionize their collision partners. Excitation — first discovered by Franck and Hertz6 — promotes the atoms or molecules into a higher energy state from which they can return to the ground state by light emission. Ionization ejects an electron from the collision partner and successive repetition of this process increases the number of charge carriers in avalanche fashion. Thus, by electron impacts causing charge carrier avalanches, an insulator can be transformed into a conductor. In contrast to homogeneous conductors such as metals or conducting liquids (electrolytes), conductors produced by impact ionization have structure. The atoms or molecules, when hit by electrons with sufficient energy, are left behind as positive ions and distort the applied field by their space-charge action (Figures 5 and 6). In front of the negative electrode (the cathode), the positive ions steepen the electric field and, by positive space charge action, a cathode fall develops. The field may become so intense that it pulls additional electrons out of the metal by field emission. Those electrons in turn, accelerated to impact ionization in the cathode fall, liberate additional electrons. Thus highly conducting paths develop, which grow as sparks from the cathode into space. Similarly, electrons falling in an intense electric field towards the positive electrode (the anode) can multiply in this anode fall by impact ionization and sparks may grow from the anode into space. Light emission, caused by electronic excitation and electron capture, can imprint the phenomenon as a “Lichtenberg figure” on a photographic plate. Lightning Benjamin Franklin, in his famous kite experiment (Figure 7), demonstrated the electrical nature of lightning. The idea was that the damp cord of a kite would provide a conductor in space and lead the charge down to a suspended key. Franklin, sheltered under a dry shed, held a silk ribbon tied to the end of the cord and noted a spark jump to his grounded knuckle; he also charged a Leyden jar. Fortunately, for the history of America and of science, he was lucky: the Russian physicist G. W. Richmann was killed while repeating the experiment (Figure 8).7 Franklin’s experience led him to develop the lightning rod for the protection of buildings. In the early decades of this century, practically every house in Europe was thus protected. However, a lightning rod, if not properly grounded, is a dangerous asset, and the chance that lightning will strike a house in an unexposed location is so small that today only high, exposed structures are equipped with lightning arrestors. Lightning can be one of the most awe-inspiring phenomena in nature — as anyone who has been caught in a thunderstorm while mountain climbing knows. It is also a spectacle of unsurpassed beauty. Figures 9 to 11 show three images that imprint themselves stay indelibly in one’s mind: a thunderstorm over a city; lightning striking a water column ejected by an exploding mine; and the spectacular lightning accompanying the birth of the island of Surtsey off the Coast of Iceland.8 When lightning struck a meadow, a Lichtenberg figure of more than one meter in diameter was found burned into the grass (Fig 12). And a man killed by a lightning stroke under an apple tree had such a figure — erroneously identified as an image of the apple tree — burned on his back. Thus Lichtenberg figures and lightning are closely interrelated. Therefore, as the title of this work suggests, in addition to their inherent beauty, images of discharge phenomena in various gases under a variety of pressures might assist in the remote identification of these characteristics of the atmospheres of other planets.

Recently, Lichtenberg figures have found a more doubtful application in “Kirlian photography.”9 The index finger of a person under psychological test serves as the high-voltage electrode and is pressed on a photographic plate. The pattern recorded is thought to reveal the state of physic health of the owner. Alas, if no special precautions are taken, it may be more a test of cleanliness than of godliness. On the other hand, we have begun to learn that the signals transmitted through the nervous system are of an electrical nature.10 Therefore, even though it may start as a heresy at its fringes, medicine is bound to make increasing use of electrical methods. “Electro-acupuncture,” a modern version of the classical Chinese method of “acupuncture,” has been developed by Dr. Voll and his colleagues in Germany.11 The “ionic effect” — the psycho-medical effects of positive and of negative ions inhaled during approaching weather fronts or from ionizers — is also beginning to get increased attention.12 Furious discussions have also arisen about the damage to health that may result from microwave radiation, from the stray electrical fields of high-voltage power-transmission lines, and from the magnetic fields of lowfrequency high power communication networks.13 Finally, the “electro-shock 6 LIFE IN TIMES OF TURBULENT TRANSITIONS treatment” — used by medical doctors in cases of psychosis — has been revealed to be a procedure of nearly criminal ignorance.14 Obviously, the time has come for a close cooperative effort of science, engineering and medicine to put electromedicine on the map without witchcraft approaches. In presenting this selection of Lichtenberg Figures to the general public, I therefore hope not only to provide enjoyment of the beautiful phenomena recorded but also to stimulate scientific curiosity about electrical effects observed in unusual situations — be they micro- or macroscopic. Future studies will be able to use today’s advanced color-photography as an additional source of insight — an enviable prospect. Postscript Lightning recorded as Lichtenberg figures transforms terror into enchantment. The genesis of complex phenomena unfolds in beautiful designs studied by scientists in puzzled contemplation (Figure 13).15 In these images, electronic excitation and ionization, the release of charge carriers from surfaces and gases, their cumulative action and re-absorption, the effects of space charges and of field distortion all can be studied in detail. And, in principle, the way is open to extend these studies from gases to liquids and solids (Figure 14). Time has run out for this observer. Old age has called a halt. But hopefully some young scientist somewhere may be challenged by the beauty of Lichtenberg figures to explore further the turbulent events that transform insulators into conductors.

2. Reproduction of a drawing preserved at the University Library in Göttingen.

5. The original says, “in the Rings of Saturn.”