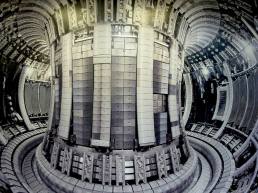 I was particularly entranced by the experimental fusion reactor, JET.
There’s almost an art-deco feel to it, but not quite. Perhaps some of the curved metal, the convex nature of the structure.
I often find it interesting to think about something that is seemingly entirely functional and kept out of the public eye, being aesthetically appealing.

I have also looked at designs for other nuclear reactors, and used them as the basis for some ‘science fiction’ drawings.

I was also interested in the ‘remote handling’ aspect of the mechanics. They use CAD modelling to create the designs for the mechanical arms. Last year I was experimenting with Arduino to create a mechanical arm that might move a pencil. I was wanting to create drawings that were made ‘without my hand’ in them. I enjoy the indeterminate aspect of that, and wanted to program an arm so it might produce interesting images. This conceptual project would also have been strongly indebted to the work of Jean Tinguely and his Métamatics.

I also want to see if I can place some photographic film with old images of me in a chamber at Culham to see how the conditions and radiation might affect the film. Below is part of a study done by NASA on how radiation causes ‘nonimage forming exposures (fog) on photographic flight film.